It could be a storybook ending, after all. 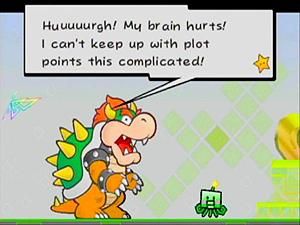 Before E3 there was a seemingly major leak of Nintendo’s press conference, this included details of a new Paper Mario game being designed as a hybrid between the old style of game and the new style. While this didn’t turn out to be true,  I haven’t been able to stop thinking about what it would look like or how it would play. How exactly would a hybrid Paper Mario game look?

There are a few signature elements from all of the games that is required at this point, they are good writing, a real story, and solid RPG mechanics. While some have shone through better than others in recent years, it is fair to say that the new games have been solid, just not what the fans wanted. These similar threads all connect Paper Mario and make the game stand out from other games in Nintendo’s catalog, even the Mario series itself has a surprising amount of diversity to it when you think about it. The differences are where you’ll see the major success or failure of the new game, they need to capture the best of the old games, while still holding on to what makes the new games so unique.

Partners, they are the biggest thing the Paper Mario franchise has been lacking for a very long time. Since Super Paper Mario the idea of having a unique partner has started to fade, starting to burn out in the previously mentioned game, there were only four partners, and many pixels, or tools to choose from. Then things stopped, and creative production took a noticeable shift, with a soft reboot of the series, making Bowser the main antagonist rather than a comedic side character again. A return to partners would be a great start for the game, it brings a deeper level of strategy and provides a lot of the critical interactions in the game, bringing new life to scenes that play out differently with a silent protagonist like Mario. There’s a certain level of charm that is lost when there is no one to speak for Mario’s side in the matter.

Badges are another thing that I would personally like to see brought back, while it may feel a little old and dusty now, a revamp could bring new life to the system, taking a creative chance with this could pay off in a huge way. The basis is there, it is a classic RPG mechanic that can still see good use today. Maybe there’s a different way to unlock and use moves, (I’ll get to that later.) But maybe these could offer different stat boosts to help with different areas of the game, serving a more passive role than an active one.

The moves I mentioned earlier could be some of what’s taken from the new games to make the series feel fresh. Instead of having big item summons requiring a lot of paint, use a special meter to do a partner attack, or to allow different attacks with a different threshold of special meter built up, battles are more unique and can take up a really positive role in this game. With a few tweaks to adjust to the changes around it and build it on a better foundation than collecting stickers or paint it could be a huge success.

Even taking from Super Paper Mario there could be different platforming aspects to the game that make it more similar to a traditional mario game. There have been elements in every single Paper Mario iteration that with a few tweaks or changes could have been made absolutely incredible. And, with Nintendo’s new commitment to giving the players what they want, I believe we have the first real chance in what feels like forever to get a more Traditional Paper Mario game. We may never get any games like the original two, as that spot has been filled by the Mario & Luigi series. However, if Bethesda and Square Enix have taught us anything, its that there is always enough room in the market for a new game so long as it is different enough. Paper Mario in its old state, while having the tenure on other series, needs to change to stay relevant itself. This could be a soft reboot that saves the series, of course, it could also be another Sticker Star, only dragging the already sagging reputation of the series and making it even worse. But, I honestly don’t believe that’s going to happen, Nintendo is seeing a renissance of quality approaching the levels of current Disney. Their oldest stuff feels fresh and relevant again, Nintendo is on fire recently, and if their recent success means anything, it’s that we should have faith in the company, after what they have done with the switch and their first party games, they deserve a little bit of trust. Let’s just hope they have hit their rock bottom with these games and there are only steps forward with this series.