Your next member of the Seoul Dynasty?

This postseason has been full of drama. The Boston and Philadelphia series going the distance with the 6 seed Philly ultimately taking the series in 3 in moving on to play New York was absolutely crazy. But, the biggest drama of potentially the entire season happened right before the Gladiators took stage or even played a game in these playoffs. Fissure, the Main Tank for the LA Gladiators, MVP candidate, and generally considered the best player on the Gladiators roster was benched right before the game. The news shocked twitter as everyone had expected the series to go one way, especially with the presence of Fissure in their lineup, he made the difference in taking an average team and turning them into a top 4 contender for the championship. 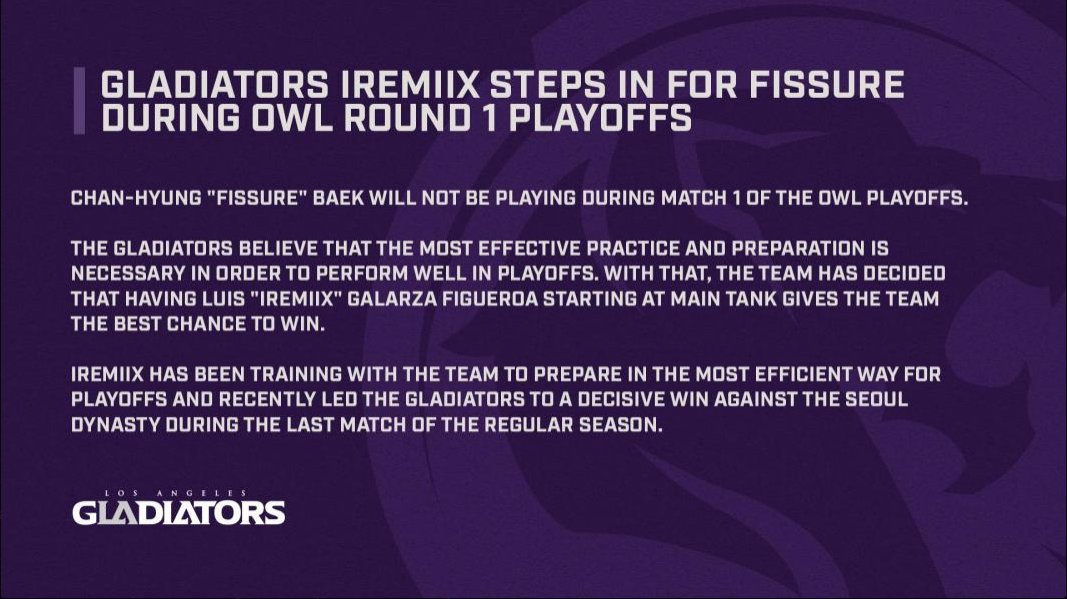 Before the game we had no clue why Fissure was out, and the rumors started spreading. Ideas ranging from plain old dissension to downright calling Fissure the Overwatch League’s equivalent to the Kawhi Leonard situation in the NBA. For those who may be unaware of the situation I will link to a video explaining it below. All of this drama seemed to come to a boil after the Gladiators 3-0 win on Wednesday, when Fissure replied to the accusations after the match in a twitch stream. Later he went on twitter to defend himself and the organization from the rumor mill that had been working while the game was being played. The tweet below is a translation of what was said in a stream by fissure himself. This is the official translation as Fissure retweeted it onto his main account.

Fissure explained a bit about the 'controversy' regarding his absence in the OWL playoffs (summary): pic.twitter.com/GUusf6uDyi

While this would have been fine any other time, it looks even worse that the the Gladiators didn’t win a single map in either match on Saturday, putting up no resistance against a London team that they had dominated all season. This of course leads to more speculation and drama, bringing up the most dreaded question in any sport “What if.” Even if one match had gone to 5 maps, or even 4, the questions wouldn’t be as outrageous. But, now that the Gladiators season is done, all the blame is seeming to fall on Fissure’s shoulders for not playing. While it may seem unfair to Fissure to in a lot of the blame on him, the team couldn’t get it together once London knew that IRemix would be in the lineup instead of Fissure, they knew how to prepare and how to take advantage of the sudden change in communication on the Gladiator’s side of the stage.

The only thing that strikes me is the timing. The meta didn’t change very much from stage 4 to the playoffs, the only real change of note was the Hanzo rework. So to say that it is primarily because of the Meta shifting feels off. These are the most important games of the gladiators season, and a major change to one hero completely changes the way a tank has to play? Unless it directly invloves the communication between setting up ultimates and timing them, but even then Fissure had more experience with the starting roster. My biggest question coming from all of this is why wouldn’t Fissure be desperate to beat the team that traded him away. He even went on record and said “I hope they regret it.” This was the PERFECT chance to live up to his word and push his team to a victory against his old team, through a language barrier. Even when down in both series I found myself hoping they would give themselves a chance and put fissure into the lineup for one last chance, however that just wasn’t in the cards.

With all this drama it doesn’t seem like Fissure will be staying in Los Angeles long, even though he has nothing but high praise and love for the team, he personally wants to play for a team where the language barrier isn’t as strong. Which is completely understandable, it is hard to imagine going through an inagural season of a brand new E-sport, all while in a brand new country desperately trying to learn the language which is notoriously difficult due to the flexibility of the language. However, his preference of teams to go to are slim, because there are only a few primarily Korean teams in the league, and even less options now that the Spitfire have shown they don’t need their former main tank to succeed in the league. This leaves the NYXL and Seoul Dynasty. The NYXL looks to be set up with their tank situation, having, Mano, Meko, and Janus to rotate between as needed in a very solid lineup with a lot of chemistry. Which leave the Seoul Dynasty as essentially the only option for Fissure to go to. Which is definetly going to make things difficult to get the proper return from him.

The only way Fissure could conceivably be traded to the Dynasty is if another team got involved, making it a three way trade. LA doesn’t want to be in this same situation again next year with a player from Seoul instead of London. So another team with a more diverse lineup of players would have to get involved to take Seoul’s player and give a tank or another player of value to LA to offset the trade. Ideally I think Note gets traded from Boston to LA as they take a tank player or even a Damage dealer to offset the loss of Note. LA would also be happy to have a top tier off-tank in their roster finally. This could be a potential trade that benefits all 3 teams and helps them either get back into or finally get to the playoffs next season. Seoul could possibly become the team that we all feared they would be at the beginning of this season if they add a strong tank to their ranks. Seoul has a bevy of talent in other roles that they could offer one up for trade. And, adding another Korean player to Boston could help the communication with Striker and Gamsu, essentially having a position player that speaks both Korean or English to help streamline shotcalling. Most importantly, however, is the fact that LA would have a strong tank presence to back up their DPS and support, providing more flexibility in their team compositions to get weird and play some cheesy comps.

http://www.haloofthoughts.co.uk/2018/07/an-interview-with-chan-hyung-fissure.html (Interview with Fissure talking about his side of the situation of everything that has happened.)

That’s just what I think though, what do you think? Is Fissure wrong for being out of the playoffs? Is there more going on behind the scenes that we don’t know about? Where would you like to Fissure go? Let me know in the comments down below!